In 280 B.C., the Greek King, Pyrrhus of Epirius, arrived in Italy with a force of 25,000 men, and 20 war elephants. Pyrrhus considered himself to be a leader and strategist on par with Alexander the Great, and he intentionally placed he and his Army in harm’s way.  Pyrrhus and his forces scored an immediate victory against the Romans at the battle of Heraclea. Although several thousand men were lost, Pyrrhus continued to march his forces deeper into Italy.

In 279 B.C., Pyrrhus fought the Romans at the battle of Asculum. Although technically a victory, Pyrrhus lost 7,500 of his finest warriors and officers. Surveying the battlefield, Pyrrhus stated, “If we are victorious in one more battle with the Romans, we shall be utterly ruined.” Pyrrhus was correct. His army was ruined. Pyrrhus eventually called off his campaign and sailed back to Greece.

Thus, was born the term, a “Pyrrhic victory.” A victory that inflicts such a devastating toll on the victor that they’re unable to continue as an army.

Although associated primarily with the military, a Pyrrhic victory can be experienced by a company of any size including large corporations. I believe we are witnessing what will eventually become a Pyrrhic victory for most of the rapid grocery delivery (RGD) companies that launched operations in the U.S.

I am an advisor and consultant to several leading RGD companies with operations in Europe, Latin America, and the U.S. I also write articles about rapid grocery delivery and retail. Over 50% of the top 10 RGD companies have contacted me seeking my advice and guidance. Most of the questions I am asked are related to strategy, operations, and M&A.

RGD companies are very similar in how they operate. There is little to differentiate the companies except for minor differences in the number of products that each company stocks and sells. A recent trend is offering consumers private label products – most rapid grocery delivery companies will eventually offer their own private label products. RGD companies use dark stores to store and fulfill inventory, and each utilizes couriers riding bicycles or scooters to make deliveries. Frankly, the biggest differentiator among RGD companies is the colorful uniforms worn by the employees of each company.

Unfortunately, most of the rapid grocery delivery companies operating in the U.S. share an additional similarity – they launched their operations in what I believe is the worst city for the companies to operate – New York City. Let me explain.

On the surface, launching a rapid grocery delivery business in a city with a population of 8.85 million people appears logical. The goal of each rapid grocery delivery company is the same as every other company in existence – create a customer. With its densely populated neighborhoods full of shoppers eagerly seeking groceries and other goodies to meet their needs, New York City is a grocery retailer’s paradise. Is it?

In discussions with executives and/or associates from RGD companies operating in New York City, I can state that most of the companies aren’t breaking even nor are they close to being profitable. Some of the companies are losing hundreds of dollars on every order they fulfill when discounts, promotions, waived fees, labor, and all other actual costs are accounted for. Reducing unit costs and achieving a profit is nearly impossible for most RGD companies.

The biggest challenge faced by the rapid grocery delivery companies is covering the costs of their operations and expansion. Everything is expensive in New York City. Everything. Rent for dark stores continues to increase because demand is so high. I continue to recommend to all RGD companies that they must invest in an end-to-end supply chain planning and analytics platform that includes AI and Machine Learning. RGD operations are extremely complex with millions of potential order and delivery combinations. The optimal supply chain and logistics solution is to automate most of the decision-making process. Based on my experience, Solvoyo offers the best platform on the market for RGD companies. A lack of supply chain and logistics proficiency remains the Achilles Heel of many RGD companies.

Raising capital is a full-time job to cover operational costs and scale to other states. Some of the RGD companies can’t raise enough capital to scale, so their faced with a situation where they’re losing money in New York City without the ability to leave.

Gorillas, for example, postponed scaling across the United States to focus on New York City. I continue to believe New York City will kill Gorillas, just like New York City killed another famous gorilla in 1933 – King Kong. My advice to Gorillas remains the same – accelerate raising capital to cover the costs of scaling operations across the U.S., and carefully manage all costs in New York City.

I continue to believe that Fridge No More and/or JOKR, will have no choice but to sell their operations in New York City; I advised JOKR in August 2021, to sell their operations and withdraw completely from the U.S. If given the chance, Gorillas should not acquire Fridge No More or JOKR, unless they can do for pennies on the dollar. Kağan Sümer, the CEO of Gorillas, is arguably one of the best CEOs in the RGD industry, and I expect great things will come from Gorillas.

New York City is full of people but with so many different rapid grocery delivery companies to choose from, consumers are constantly taking advantage of promotions and low prices. This has resulted in customers churning between companies. Several players in the space have exceptionally low customer retention rates. According to customers of RGD companies in New York City that I spoke with, they stated to me that, “It’s fun to receive so many free things.” When I asked if they had plans to continue using rapid grocery deliver services when the free stuff and promotions end, the customers replied, “probably not.” This is a BIG problem for the RGD industry.

Instead of launching in New York City, I recommended to three of the leading RGD companies that they should launch their operations in California, Oregon, Nevada, Arizona, Idaho, Washington State, Florida, or Texas. For example, Dallas, Ft. Worth, Plano, Houston, Austin, and the North Texas region of Frisco, Prosper, Celina, and McKinney, are consistently ranked in the Top 10 fastest growing cities in America. Texas is a pro-business state that has invested heavily in building new housing developments, roads, and amenities to attract families. Texas also has one of the largest grocery markets in the U.S. Best of all, rent and operating costs are lower.

The RGD companies that I advised stated that they were concerned about launching in Texas, and states not on the East Coast, due to the lack of density. A weakness of the RGD business model is operating outside of major cities. Instead of relying only on bicycles and scooters to make deliveries, operating in Texas and other states, will require RGD companies to leverage vans to make deliveries in certain cases. My reply was, “So what?” Copy the Robomart model whereby consumers hail vans stocked with groceries to arrive at their home. Mobile retail is an ideal addition to the RGD model. I also suggested incorporating robotic vending machines and delivery robots from Tortoise Cart. There is no ‘one size, fits all’ strategy for introducing and scaling RGD in America.

The RGD companies I advised not launch in New York City, are all losing money. I am in discussions with each company about improving their operations and exploring different strategies.

As for the future of RGD in New York City, I expect JOKR and Fridge No More to merge, be acquired, or sell their operations in New York City and exit the market. I also believe it’s plausible that Gorillas and Buyk may merge or form some type of a strategic relationship. Buyk, Gorillas, and Getir may choose to consolidate or form a strategic partnership. The future of RGD is consolidation and acquisitions – there is no other way.

I also encourage all of the RGD companies operating in New York City to ditch their promise of grocery delivery in 10 to 15 minutes, and instead market deliveries will be made in one to two hours. There are many benefits in slowing down the delivery promise, for example, RGD companies can more easily leverage micro-fulfillment centers to automate order fulfillment.

In addition, I recommend focusing on improving the appearance of dark stores by removing all window coverings to make it easy for people to see inside, and I strongly recommend allowing customers to pick up their grocery orders from dark stores. In many ways, dark stores with windows covered and an air of secrecy regarding what’s taking place inside, are a modern-day version of a crack house.

The cold hard truth is that New York City will become ‘The Graveyard of Empires’ for the rapid grocery delivery industry. Some companies will achieve nothing more than a Pyrrhic victory, as they will be too weak to scale. Only a lucky few will survive. My advice to the rapid grocery delivery companies struggling in New York City is this – withdraw. Now. 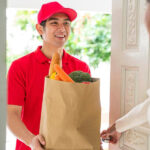 How Rapid Grocery Delivery Companies can Automate their Operations 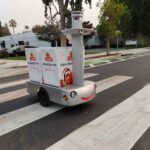 Tortoise Cart Is In Big Demand By Retailers: Here’s Why 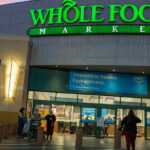 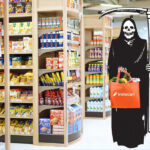